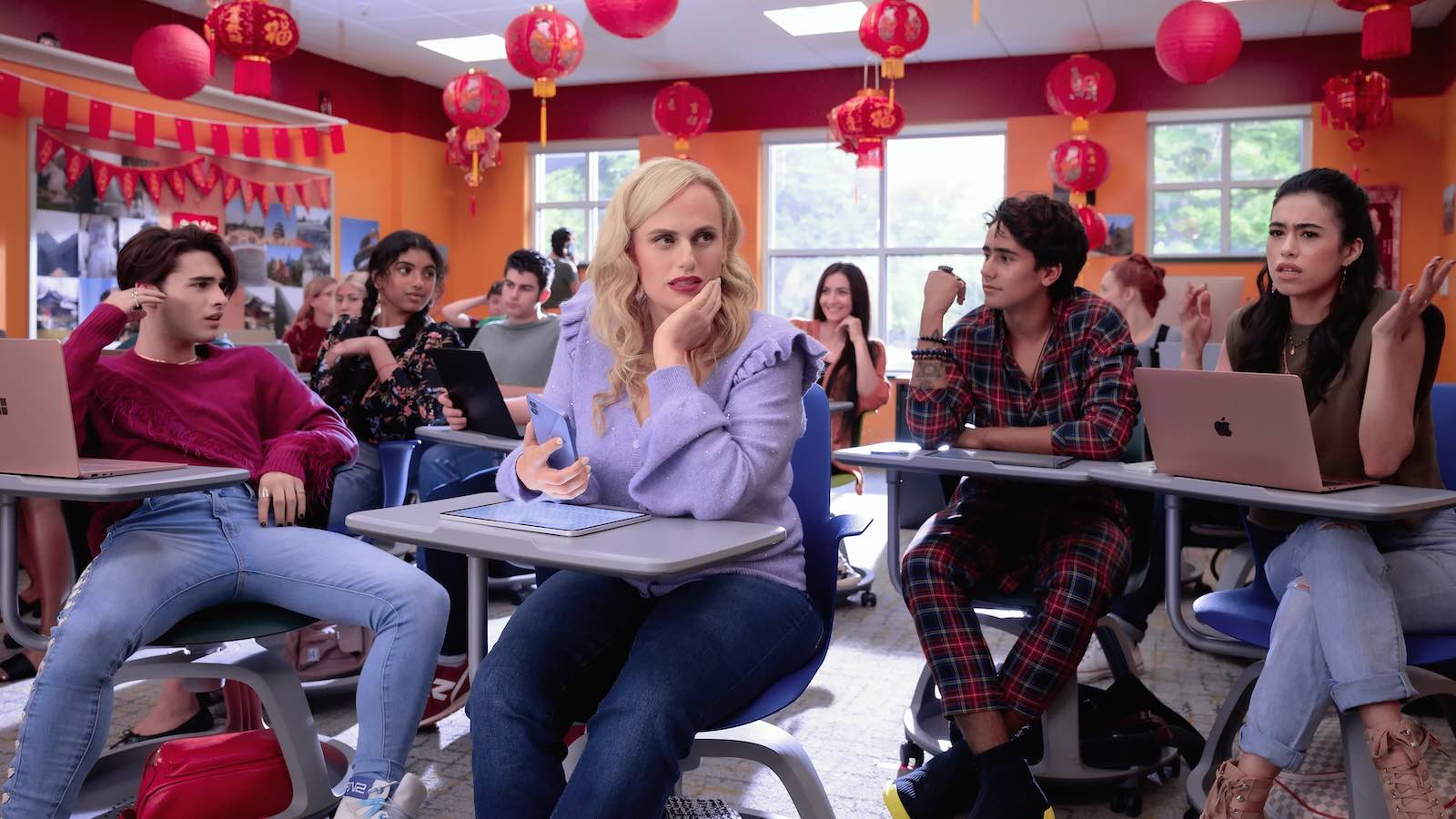 Turn-of-the-millennium nostalgia and second chances get tapped for laughs in Netflix’s Senior Year. In Rebel Wilson’s first Netflix exclusive the Australian actor plays a 37-year-old cheerleader who wakes up from a 20-year coma caused by a sabotaged cheerleading routine accident. Accepting her fate, she picks her life up where she left off, with two months left in before graduation and senior prom.

The film starts in 1999 with at the bowling birthday party of young Stephanie Conway (played as a teenager by Australian Angourie Rice), feeling left out of the cool kid clique and from getting a proper American high school experience. Inspired to become popular and eventually promo queen, Stephanie reinvents herself in freshman year, succeeding at becoming a cheerleader as we music-montage through 2000 to 2002. In her final day awake we see popular Stephanie, still with her original friends, as she battles her nemesis over control of the after-prom party and is ultimately taken down in a failed basket toss at the school assembly. Cut to 20-years later and Wilson’s Stephanie awakes in a hospital room, confused and not aware how much time has passed. After the initial short and a weekend adjusting (off camera), Stephanie demands to return to school so she can finish her senior year. Dropped in to an alien world, Stephanie finds some changes hard to overcome, driving her to fulfill all the experiences she missed before graduation.

Despite the desire to hang with the popular kids, Stephanie finds herself eating lunch not with the top clique, but the real cool kids, ones who happily accept her, regardless of the oddity of her presence. And without spoiling much more, by this point the main characters have been introduced and our hero has her mission and new circle of friends.

One sticking point with the story does come up. Can Rebel Wilson not do an American accent? And would her character not have lost the accent while trying so hard to become popular? Wilson’s performance is great, without her having to depend too much on her usual shtick. Her character being Australian is somehow important to fitting into an American high school, but not totally central to the plot. Any actor could have played the transition from social outcast to popular girl without necessarily her needing to be from another country. Also there’s little explanation for why her mother and her moved stateside and how that fits with her American (works retail) father.

There’s a moment during the prom when characters you probably weren’t rooting for redeem themselves, and all the students seem to finally drop the social ranking. With the barriers removed, all the students are finally equal and free to be their individual selves without prejudices or jealousy, in that “it got better” sort of way we hope high school has become. We weren’t treated to too much bullying or homophobia in the 2002 era school, only the social ranking and cheerleader clique.

Possibly Wilson’s character wasn’t aware of the prejudices and oppression of the past, her 37-year-old character immediately accepts the non-popular and queer students without a second thought. While her desire to become a cheerleader again and return to popular status, it doesn’t appear to bring out the snarky teenage of 2002. Seeing the cheerleaders not being at the top of the social pecking order drives her to help the group rather than abandon them for the supposedly popular kids. And it doesn’t occur to Stephanie until much later, the once former outcast and now overaged senior has gravitated to other outcasts, guiding them to get the full high school experience.

Yet weirdly the outsiders are only made to feel outcasts by social media, while they’re freely allowed to be themselves (an effeminate gay boy, a bookish overachiever with political aspirations). They are already the cool kids, and the plot more about taking down the last of the cliques, then it is about fitting in.

By far one of the best performances came from Joshua Colley’s character Yaz. Play close attention to his stellar joke in his first scene. And of course for bringing an unapologetic gender-bending queer. Michael Cimino gets higher billing for his solid performance as Lance, delivering fewer lines than Joshua, but remaining sweet and charming.

While the critics may have passed on Senior Year, viewers are loving it. The range of opinions go from questioning casting Wilson to complaining the there are no laughs. And then there are those that claim we’ve had too much millennial nostalgia, coming from boomers or gen-xers pining for more 60s-80s period pieces. The criticisms seem weak and misplaced. Senior Year is a comedy, and doesn’t need to be taken as reality to be enjoyed.

Is it Tres? Senior Year is a fun movie that doesn’t take it too seriously but has a heart-warming message. And there’s a few hot boys!