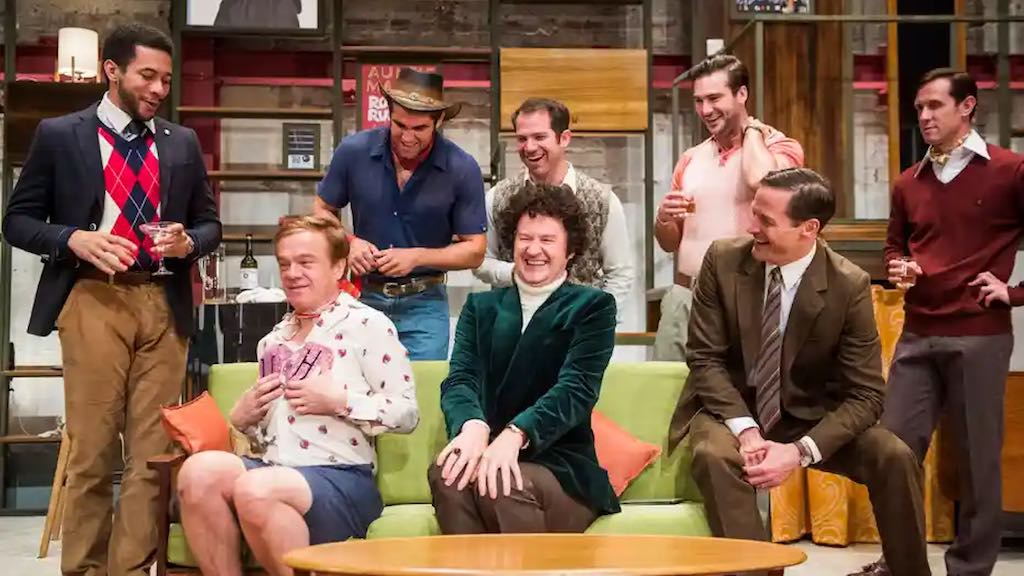 After touring the UK, the first major revival of the classic play in years has landed in London’s West End for a strictly limited run. With a cast led by Sherlock & Doctor Who writer/actor Mark Gatiss and his husband Ian Hallard, Boys in the Band still remains a powerful message nearly 50 years since it was first staged.

Boys in the Band takes place one night in the upper east side apartment of Michael (Hallard), who’s throwing a birthday party for his friend Harold (Gatiss). The nine characters arrive and the drama unfolds thanks to a surprise guest, Michael’s former college roommate Alan, who is both fighting his own sexuality and those of the other guests.

The evening evolves into a nasty game concocted by Michael to make a point to Alan. Scorned by society at large, even embodied through Alan, the characters struggled to be themselves, coming across to the audience as stereotypes of effeminate, swallow and bitter gay men. While much criticism remains for the play, even today, this was a product of the time when men still felt much shame and guilt for their sexuality. These men weren’t merely marginalized but vilified by society, leading to drug and alcohol abuse, unsafe anonymous sex, taking of prescription drugs, and therapy. As joyful and carefree these men appeared, they struggled greatly to accept themselves.

The original play by Mart Crowley premiered off-Broadway in April 1968, more than a year before the famous Stonewall riot that was an important catalyst for starting America’s gay-rights movement. This was a time when men were fired for being gay, when gay bars were run by the mob while it was also illegal to sell alcohol to gays. Being out was limited to these small circles of friends, and gay men were still fighting with their own personal demons.

Boys in the Band was turned into the classic 1970 film of the same name which is still worth seeing, but if you get the opportunity, catching a staging of the play is well worth it.